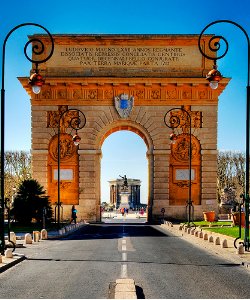 photo taken in my city

It’s been awhile since I posted about my goal to become fluent in French. For the new people here, I’ve been spending the last 8-9 months practicing the language, with the last 4.5 living in France.

First off, I’m definitely not a language learning expert. This is my first attempt at learning a foreign language, so don’t confuse me with polyglots such as Steve Kaufmann or Benny Lewis. Their feats certainly dwarf mine.

However, as I feel the story is perhaps more important than the end product, I’d like to share some of my mistakes and successes so far.

The Ups and Downs of Language Learning

Learning a language is an interesting goal because it fluctuates between grand overconfidence and crushing embarrassment. I’ll often pride myself in my French ability, until tongue-twisted in a seemingly easy situation.

My French friends will often comment that I speak, “super bien.” At which point they will make a comment and I won’t understand. Two steps forward, one step back. Language learning often feels like a drunken stumble towards progress.

Despite the struggles, I’ve found the experience incredibly enjoyable. Learning a foreign language has had benefits beyond just being able to communicate. It’s a skill, like karate or painting, that becomes more enjoyable the better you become.

My Progress: Where I am Now

I find this question impossible to answer, since it all depends on when you ask me.

I spent a week with a French-speaking Belgian family during the Christmas holidays. Completely in French, as they spoke little to no English.

In the beginning, I was quite happy with my progress. Then I made the novice mistake of referring to my roommate as “ma collocataire” instead of “mon collocataire”. (In French, the possessive adjective “my” takes on the gender of the object, so my statement was only consistent with having a female roommate)

This led to an interesting discussion about the attractiveness of my roommate until we eventually uncovered my mistake.

So the best answer I can give is that I’m fluent in French, except when I’m not.

What I Would Do Differently Next Time

First, I’d like to point out that I truly hope there will be a next time. Immersing myself in the exciting strangeness of a foreign culture and language has been a great experience. I already have thoughts about where the next challenge may take me.

However, I think I made a couple mistakes that hindered my language learning ability. Some of these were understandable at the time I made the decision, or even unavoidable. But, in the future I’ll be more aware of these potential pitfalls.

Mistake #1 – Not Being Immersed Enough

My classes are in English. My roommate is Canadian and English-speaking. And, living in a university city, many of my friends are foreign exchange students. The majority of my speaking time is in English.

I have been doing my best to correct this mistake, but I realize it is more difficult once you’ve already established yourself in a new country. I tried getting my classes switched to French but was turned down because the French courses already were well over capacity. I also have no plans to ditch my roommate or English-speaking friends.

So my solution has been to take smaller steps to immerse myself. My week-long complete immersion in Belgium was one. Biasing myself towards parties with people speaking mostly French is another. I’ve even recently dedicated a 30-Day Trial to start switching over my reading/listening to French.

Mistake #2 – Being Too Afraid of Inarticulateness

Yes, I’m a real person with fears and worries too.

When I started learning French, I was very self-conscious about my lack of articulateness. It feels embarrassing when you’re mid-sentence and can’t complete a thought. Especially early on when you don’t even have the words to explain your predicament and instead end with an awkward silence.

I feel it was worse because, having written for several years and polished my public speaking skills, I’d consider myself above average in articulateness in English. I’m not a wordsmith, but my abilities with my native language made me feel even more naked when speaking outside it.

Mistake #3 – Not Congratulating Myself Enough for Progress

Earlier this week I met a group of new exchange students. Many of them didn’t speak French at all. Although there were many people with limited to no French skills when I arrived in France (myself included), it didn’t stand out.

Conversing with them, I forgot how much I (and most of the other exchange students) progressed in French. Surrounded in a bubble with people who speak the language much better than I do, it was easy to forget that I actually was making progress.

I believe confidence comes from legitimate success. But if you don’t acknowledge that success when it comes, or can’t perceive it, then you can’t improve.

For many of the readers my foray into learning a foreign language is just an interesting anecdote. Most of you have no plans to leave home, live in a foreign culture and take on the challenges that come with it. That’s okay.

But I think learning languages speaks to a broader mission. The goal to live an adventurous life. I would say that people tend to emphasize the exciting experiences as key ingredients in an adventurous life–wild parties, tourism or sky diving.

However, that emphasis ignores what I feel is a more important ingredient: the patient process of learning new skills. Without some degree of sweat and difficulty, adventures are just postcards, not memories.

I could have easily lived in France, especially this city, without bothering to learn more than basic French. But if I had chosen that path I would have missed the true challenge and beautiful strangeness that learning a foreign language has given me.